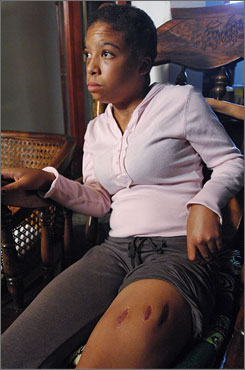 CHARLESTON, W.Va. —  A woman imprisoned for her role in the 2007 kidnapping and torture of a black woman by seven white men and women said Friday the victim wasn't telling the truth when she denied this week that the attack occurred.

Frankie Brewster told WCHS-TV in Charleston that multiple crimes were committed against Megan Williams during the attack in West Virginia's rural Logan County, about 50 miles south of Charleston.

An attorney representing Williams said Wednesday that she is now recanting statements incriminating Brewster, her son Bobby and five others. All seven pleaded guilty and six are serving lengthy prison terms.

Brian Abraham, the Logan County prosecutor in 2007, also has dismissed Williams' new story, saying the convictions were based on the defendants' own statements and physical evidence rather than what Williams said.

Williams originally said her captors, including boyfriend Bobby Brewster, beat her, raped her, forced her to drink urine and eat feces, poured hot wax on her and taunted her with racial slurs in a trailer in Logan County. Williams was rescued after a passer-by heard cries from the shed where she was kept and an anonymous caller tipped off sheriff's deputies.

"It did happen," Brewster said during the interview at the Lakin Correctional Center, where she is serving 10 to 25 years. "All of us participated."